It’s a really good movie. Not going to lie. But one thing bugged me the entire film. The female lead Claire, played by Bryce Dallas Howard, could have been so much better.

Here’s why: she’s a pent-up career woman who, when reminded by her sister that having children is a ‘when’ and not an ‘if’, gets all teary-eyed and weird even though she’s super successful and who cares if she doesn’t have kids.

But the absolute worst part was her attire. She starts off in a crisp white blouse and skirt combo, complete with heels. She remains in heels the entire movie, even when running from dinosaurs through the jungle. Yet she becomes progressively more undressed. By the end she’s in a tight camisole and her skirt is ripped up the side to give her Angelina-side-leg. And she can finally kiss the hero because she’s suddenly sexy and no longer frigid. Cliché much?

It’s like on Saved by the Bell when Jessie Spano relented on allowing Slater to call her ‘mama’ because he was so damn dreamy. That slippery slope of Freudian creepiness led to straight to Showgirls.

Or on Miss Congeniality when Benjamin Bratt finally showed Sandra Bullock some positive attention because she brushed her hair and put on make-up, because being a badass FBI agent wasn’t good enough until she could walk in heels.

Or my beloved Princess Bride when Buttercup screams uselessly instead of hitting the rodent of unusual size with a stick (they were in the woods, there were sticks EVERYWHERE) as it attacked Wesley.

Jurassic World is a great film, but I couldn’t help but cringe when the movie’s outstanding hero was the strapping alpha male (literally, there’s a whole subplot about him being the alpha in a pack of raptors) who spoke through gritted teeth, even though the damsel in distress saved the day a few times herself. Unfortunately, those heroics were muted by her rack and a hint of thigh. 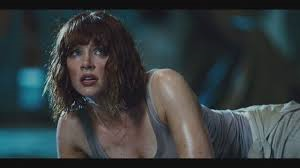 One thought on “The worst part of Jurassic World”