The documentary opens with a dewy-eyed Winona Ryder on the microphone at some event, gushing about her love for JT LeRoy. But who is JT LeRoy?

I remember hearing about literary darling JT LeRoy some time in 2001 from one of my friends who is more aware of artistic trends than I’ve ever been. The buzz was interesting even in Arkansas. LeRoy’s novel Sarah, meant to be an autobiographical account of his truck-stop prostitute mother, was published 1999. JT claimed to be a former prostitute himself, pimped out by his mother to men who preferred “boy-girls”. He was HIV positive and a former heroin addict. With his emergence onto the literary and Hollywood scenes, it had the makings of a fairytale. And that’s exactly what it turned out to be.

The character of JT LeRoy came from the mind of Laura Albert. She was depressed and called a suicide hotline. “Terminator” spoke to Dr. Owens, and Laura presents it like she was a conduit to this troubled young man who needed his story heard. According to Albert, she started calling suicide hotlines and pretending to be a boy when she was a young teen living in an abusive environment. She felt she got more support when she presented the trauma as if she were a boy.

Meanwhile, he/she managed to reach out to Dennis Cooper and land his agent Ira Silverstein. Silverstein felt that he had found a fresh, new voice.

LeRoy initially refused to do readings, claiming that he was too shy. So other people would join in to read for him. But eventually that wasn’t enough. So Laura Albert enlisted her boyfriend’s sister, Savannah Knoop to play JT. Savannah had an androgynous look, and Laura added giant sunglasses and a blonde wig to complete the costume. Laura added the characteristic of trans to JT’s story. The high voice and hairless face were attributed to hormone therapy.

Laura always felt like an outcast, and now she was suddenly a star. Only no one knew it. And she was still struggling with her weight and self-esteem, along with childhood trauma. To insert herself into the JT LeRoy narrative, she started speaking with a British accent and presented herself as JT’s assistant and best friend, Speedie. Geoff, Laura’s partner and Savannah’s brother, was a part of JT’s entourage as well. He went by the name Astor.

JT LeRoy’s rise was fast and furious. He became a star- a society darling, fashion icon, literary star. And that’s when Albert’s make-believe character really became self-aware. Or she put it, “her Barbies came to life.” Which was a strange way to put it since she mutilated her Barbies as a child. Savannah got to hang out with actors, rock stars, authors, directors. Gus Van Sant hoped to adapt one of JT’s books.

A raccoon penis bone-a reference to truck stop prostitutes-became the symbol of JT’s cult. There is a photo of U2’s The Edge wearing one on a necklace. LeRoy’s champions included Bono, Billy Corgan, Courtney Love, Michael Pitt, and Eddie Veder.

The Heart is Deceitful Above All Things (LeRoy’s second release) was made into a movie that got into Cannes. Savannah (as JT) is invited to sit on a panel, while Laura and Geoff had cameos in the film but they were cut.

Rumors flew that Dennis Cooper or Gus Van Sant wrote the books, but eventually people started to realize that it was probably Speedie pulling the strings. A high school friend of Geoff’s was eventually the whistle-blower.

New York Magazine’s Stephen Beachy broke the story in 2005. Celebrities came to JT’s defense. More stories followed, but Albert dug her heels in, other than admitting the truth to Billy Corgan and David Milch.

But once a photograph of Savannah surfaced, denial was no longer an option. Savannah and Laura were determined to stay quiet, to not give the media what they wanted. But Geoff spilled everything.

Laura Albert insists that JT LeRoy was never a hoax. JT LeRoy was very much real to her without being a physical presence. And that’s perhaps where the lines got blurred. She didn’t write the stories of JT LeRoy knowing that she would have to produce a real person. But when the time came, she did so instead of admitting the truth.

Each book was categorized as fiction, but was understood to be based on JT LeRoy’s life. So yes, she was deceitful. But she also gave the people what they wanted. Though it’s obvious that JT LeRoy’s backstory helped Laura Albert get the work published, she insists that wasn’t her intention.

In Author: The JT LeRoy Story we get Albert’s story firsthand. From her troubled youth all the way to the make-believe that got away from her. It’s interesting to watch, though somewhat voyeuristic considering that much of the material focuses on recorded phone conversations in which celebrities didn’t know they were being recorded. 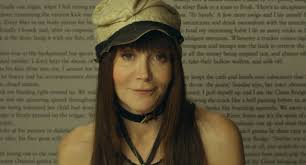 The question remains: was JT LeRoy an elaborate hoax or a work of fiction that came to life?  Given Albert’s history with telling the truth, this documentary does not give a satisfactory answer.