The first time I saw a trailer for Bohemian Rhapsody, I was so excited I could hardly stand it. For years we’ve heard about a Freddie Mercury biopic, but all of the starts and stops had me convinced it would never happen. Waiting to see it felt like unnecessary torture. And then the early reviews started rolling in. Sheila O’Malley of rogerebert.com gave it one star. ONE FREAKING STAR.

The overwhelming consensus of the bad reviews is that the movie waters down Freddie Mercury’s sexuality, his drug abuse, etc. The negative reviews make it sound like the movie barely addresses his bisexuality (or homosexuality, depending on who you ask). The first trailer didn’t mention it, and instead showed him with his wife Mary Austin, so it was easy to believe. But as misleading as the trailer may have been, it’s simply not true that his sexuality is ignored.

Another complaint was that it doesn’t cover his childhood. But it’s a movie, not a miniseries. And it goes right into the formation of Queen. As much as I would love to learn more about Freddie Mercury’s childhood, I would have been impatient waiting to get to the meat of the story.

Bohemian Rhapsody begins with Freddie as Farrokh Bulsara, a baggage handler at Heathrow. The story evolves quickly. Within a few minutes of the beginning, Freddie is meeting Mary Austin (a heartfelt performance by Lucy Boynton) and the men who will become his bandmates. There is a feeling that we have somewhere to go and there’s no time to waste. I enjoyed that vibe, as it mirrored Freddie’s unstoppable ambition. 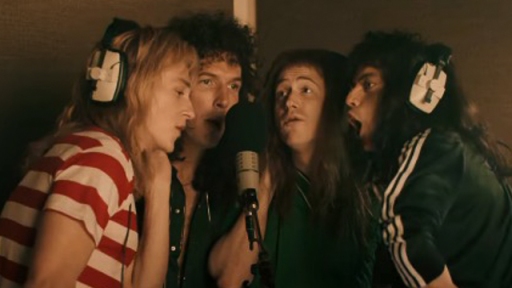 The story covers his marriage, which is a beautiful and devastatingly flawed love story. We get to see the band writing their songs and grappling over their individual artistic visions, and fighting to have their music heard. The movie goes into Mercury’s drug abuse, sexuality, hedonism, divorce, and HIV diagnosis. It ends with their triumphant performance at Live Aid.

Freddie Mercury is portrayed as brilliant and dangerous. Above all, he is a performer. Perhaps some reviewers wanted more about his personal life and less about his art, which was one thing he struggled with when he was alive. He was an artist and performer, and didn’t feel that he owed unlimited entry into his personal life to his fans and the media.

Does it feel like there is more to the story? Absolutely. But how much can go into one movie?

Each band member is perfectly represented. And Rami Malek is fantastic as Freddie Mercury. Every person in this movie is giving it their all. Even the bad reviews confirm that the cast is brilliant.

Freddie Mercury is one of the most beloved musical icons of our time. I understand why there are high expectations to meet with this film. The flawless performances and glimpses into Freddie as a person and not just a persona had me glued to the screen. There is a lot of music in the film, much to my delight. The only reason I can see for not enjoying this film is if you’re not a Queen fan. If that’s the case, stay home.